A Bear is Eating My Camera

It was a brilliant Indian summer afternoon at Elk Lakes Provincial Park in Canada’s eastern British Columbia. Blue skies reigned over pale grey granite mountains as the mercury reached an unseasonable eighty degrees Fahrenheit. There were no deciduous trees in sight to offer any clue that it was, in fact, mid-September yet the subtle hints of yellow, orange, and red hues in the meadow grasses and huckleberry bushes betrayed the undeniable and irresistible pull of autumn. Bull moose wading the far shores of the marsh ponds had long disposed of their antler velvet and a fresh dusting of snow from the last passing front adorned the serrated peaks of the Continental Divide, the conspicuous border with the province of Alberta.

Elkford’s Chamber of Commerce might have billed this afternoon as “idyllic” but the bright sun and robin-egg blue skies reduced this photographer to just another tourist, squinting through the windshield while admiring the scenery and stopping to unfold and refold the map until driving yet again with no particular destination. Everyone plays the clueless tourist at some point whether any of us wants to admit it or not.

I was preoccupied, busy processing a flood of pleasant memories from a trip fourteen years earlier when I arrived with just a film camera and a bamboo fly rod. The Elk River courses through the heart of the park and just happens to host the prettiest, most naive cutthroat trout whose acquaintance I’ve ever had the pleasure of meeting. Toward no dry fly did these beautiful fish seem to pass any judgment or discrimination. Rising through swift, glacier-fed currents from the river cobbles they would inhale a dry fly from the water’s surface with such dumb innocence, it would almost break your heart.

I considered leaving the camera packed away and renting a fly rod, buying a few dry flies, and wetting a line just for the sake of nostalgia but ultimately thought better of that idea. The passage of time enhances good memories and elevates epic ones to near mythological status, which could only lead to a letdown. Besides, it wouldn’t be the same Elk River of fourteen years earlier. You never wade into the same river twice.

It was during that visit that I also laid eyes on my first honest-to-goodness wild grizzly bear. It was at a safe enough distance – at least 200 yards – and we were separated by a particularly deep and broad section of the river. The old boar stalked the meadow’s edge with the purposeful gait and confidence that only an apex predator of the wild could get away with. When his head spun around on its massive shoulders and our eyes met, the coldest shiver ran down my spine and my toes tingled. I was flying.

If you travel to and spend time in North America’s great wilderness areas, you will eventually have to deal with bears – either real ones or the phantom bears of your all-too-vivid imagination. Which of the two is worse is a matter for debate. Still, a solid piece of advice to follow when walking or hiking in bear country is to make as much noise as possible, not necessarily to scare the bears away, but to create an awareness of your presence, since startling or surprising one at close range would spell certain disaster for both the hiker and the bear. Some examples would be wearing bear bells, intermittent clapping or yelling, and talking loudly – either within a group or just to yourself if you happen to be alone.

I’ve always preferred talking to myself since I tend to do it anyway: politics, religion, the use or overuse of HDR – you know, the usual topics to avoid in polite company. In fact, hiking through bear country is one of the few occasions when talking to oneself is the sane and reasonable thing to do. Having the discussion evolve into heated argument, however, is probably a bad sign.

I decided to take an afternoon hike to a small alpine lake for sunset. It was likely to be an exercise in futility, if not merely good old-fashioned exercise for its own sake, but I was in a particularly beautiful part of the Canadian Rockies on an otherwise glorious September afternoon so what the hell? At worst, I’ll have had an invigorating walk through some incredibly scenic country and maybe even take a photograph or two.

The trail rose from the valley floor, cutting a steep and rocky path through a fragrant forest of alpine firs, Engelmann spruce, and lodge pole pine. The hot sun and thin air conspired to make the hiking slow and burdensome, but I was in no particular hurry. I would stop every so often to rest while small animals and birds would reveal themselves once I settled down and sat for a bit: a few chipmunks, a pika, and one blue grouse that nearly came within an arm’s length of the rock on which I was sitting. I attempted a few photos, glanced at the LCD display, shrugged, and started walking again.

After a couple of hours, I stopped for yet another breather and an opportunity to heed the call of nature, once I found an acceptable powder room. I set my tripod firmly on the ground, with camera and lens attached, and ducked into a dense labyrinth of scrub birch and willows for some privacy, as if I needed it. Almost immediately upon entering the thickets, I heard a crashing noise, the breaking of branches, and a grunting and growling that seemed to be getting close in a hurry. I made a hastily arranged, undignified retreat back to the meadow and was closely followed by a visibly agitated black bear. I kept my distance and did my best to talk it down in soft, reassuring tones.

Eeeeasy there big fella. You’re a good bear, aren’t you? We don’t want any trouble now, do we?

Perhaps it was the patronizing tone or the disgraceful visage of a grown man standing in an alpine meadow with his shorts dangling from his hiking boots, but the attempted reasoning only made the situation worse. The bear projected its growing displeasure on my nearby tripod and camera by swatting it to the ground with considerable flair (settling the mystery of whether a falling camera in the forest makes a sound – that would be yes). Then after concluding that the alliance of applied force and gravity didn’t do enough damage, the bear took the camera in its massive jaws and began doing its best great white shark impression. I watched helplessly as shards of black plastic exploded from the exquisite piece of technology formerly known as my Canon DSLR. It occurred to me that if the bear was desperate and hungry enough to try and extract nutrition from a digital camera, who’s to say that it wouldn’t be as equally desperate to try to take a pound or two of flesh from me? Black bear attacks on humans are extremely rare but are nearly always fatal since the motivation is usually food, not temporarily neutralizing a perceived threat.

The bear took the camera in its massive jaws and began doing its best great white shark impression. I watched helplessly as shards of black plastic exploded from the exquisite piece of technology formerly known as my Canon DSLR. 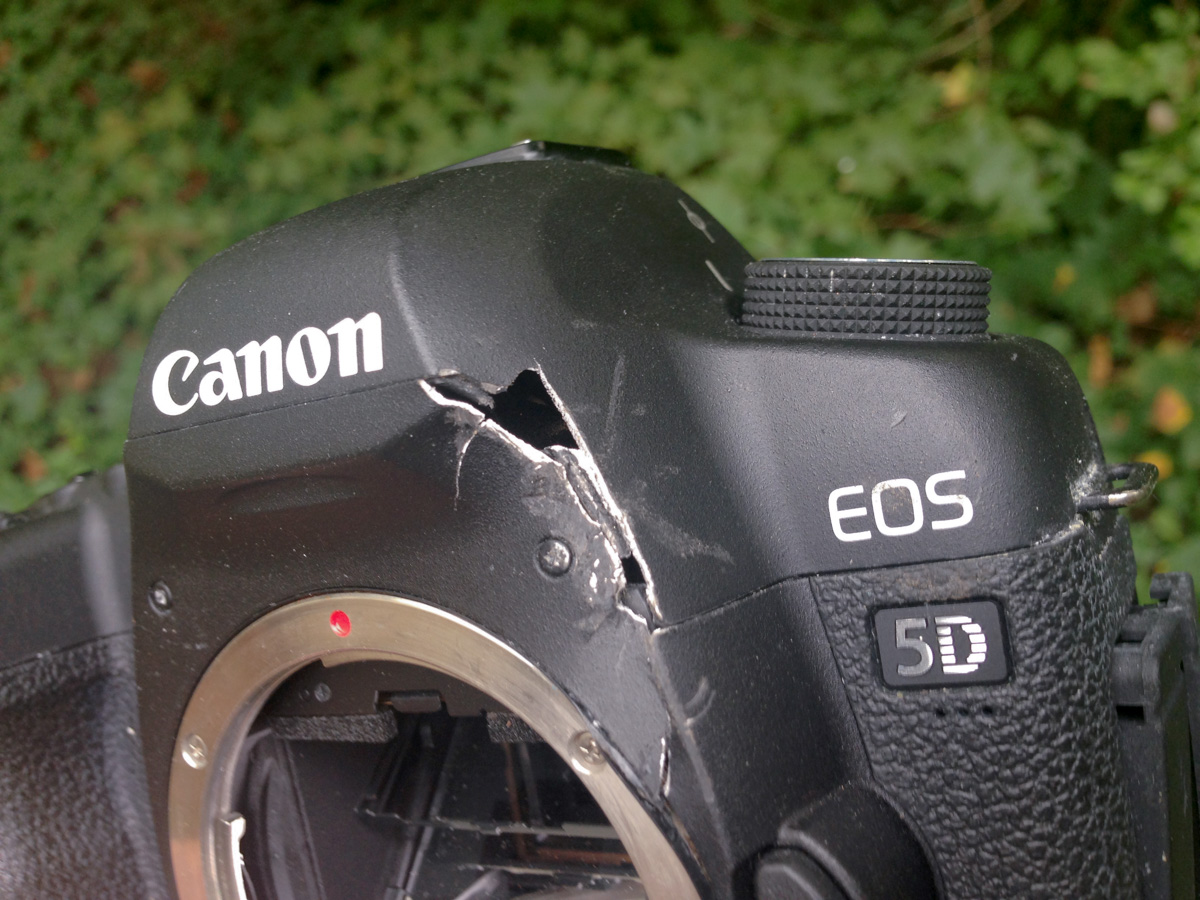 I’ve actually had the unsettling experience of being charged by an Alaskan brown bear at close range a couple years earlier, before it stopped a mere ten yards or so before hello darkness my old friend, I could now only presume. As it was happening, time sped up – or maybe it slowed down – I don’t really remember as most of the details are now lost to the fog of terror and adrenaline. But I’m proud to say I did everything right as it was taking place. For one thing, I didn’t run, which is the cowardly half of the primal flight-or-fight response and an impulse that’s almost too difficult to resist. I stood my ground with my hands raised over my head, avoiding direct eye contact while waiting for fatal impact. I also resisted screaming like a little girl, another impulse that seemed all too appropriate at the time.

But no amount of screaming, pleading, or begging was going dissuade this psychotic creature from performing a crude camera lobotomy before my eyes. For obvious reasons, none of this episode was captured on camera since, short of whipping out my iPhone and snapping the most epic of selfies (which only occurred to me in hindsight), all I could do was stand there feeling dumb and helpless, which is probably how I looked as well.

When the bear finally grew bored of this tasteless encounter, it casually ambled back into the thickets, probably to find some real food. While my wide-angle lens and tripod survived the encounter unscathed, the same could not be said of the camera itself. Surprisingly, I wasn’t angry or upset. I didn’t harbor any feelings of vengeance or retribution. Violence, real or imagined, never even entered my mind. I was, quite simply, a bit dumbstruck. It was bizarre. It was surreal. It might have actually been funny had it been someone else’s camera.

I did try to laugh about it, I truly did. But like most humor involving real bears, I just couldn’t find anything funny about it. Bear jokes told by those not accustomed to spending time in bear country usually fall flat with those of us who do since they either contain too little truth or too much. Punch lines involving bells in bear scat might provoke some reluctant laughter on the part of the fervent backpacker or hiker because of the obvious irony, but the gag still overreaches and ultimately misses the mark.

Then there’s the joke about how it’s not necessary to actually outrun a bear, only the luckless partner of the joke’s narrator. Despite the ridiculous notion of running from a bear to begin with, I guess it was funny enough the first time. But after subsequent recitations, it quickly began to pall. At Brooks Lodge in Katmai National Park in Alaska during a recent visit to this magnificent bear sanctuary, there were five or six of us guys talking and loitering in the dining hall after dinner one evening when one of the older sports needed to regale us with this particularly stale one-liner. The response, not surprisingly, was almost no response at all, save for the feeblest of laughs I feigned out of face-saving politeness. The gesture apparently went unnoticed since he insisted on repeating the line all over again – this time louder and with more enthusiasm, in case we all missed the point the first time. I excused myself from the table to get another beer.

As daylight evaporated from the crisp Canadian sky, a cold wind barreled down the valley from the Great Divide – a stark reminder that autumn really was imminent. I collected my broken pieces of camera gear and started down the dusky trail to the car, talking and muttering to myself the entire way.

Richard Bernabe is a professional photographer specializing in travel, wildlife, and nature as well as an author of books, magazine articles, and travel essays published world-wide. Richard is a global influencer is the fields of photography, travel, and wildlife conservation with more than 1.2 million followers across social media platforms. He leads photography tours and workshops all over the world and is a high-demand keynote speaker. For more great information on new images, book projects, public appearances, photography workshops and tours, Sign Up For Richard’s Email Newsletter. 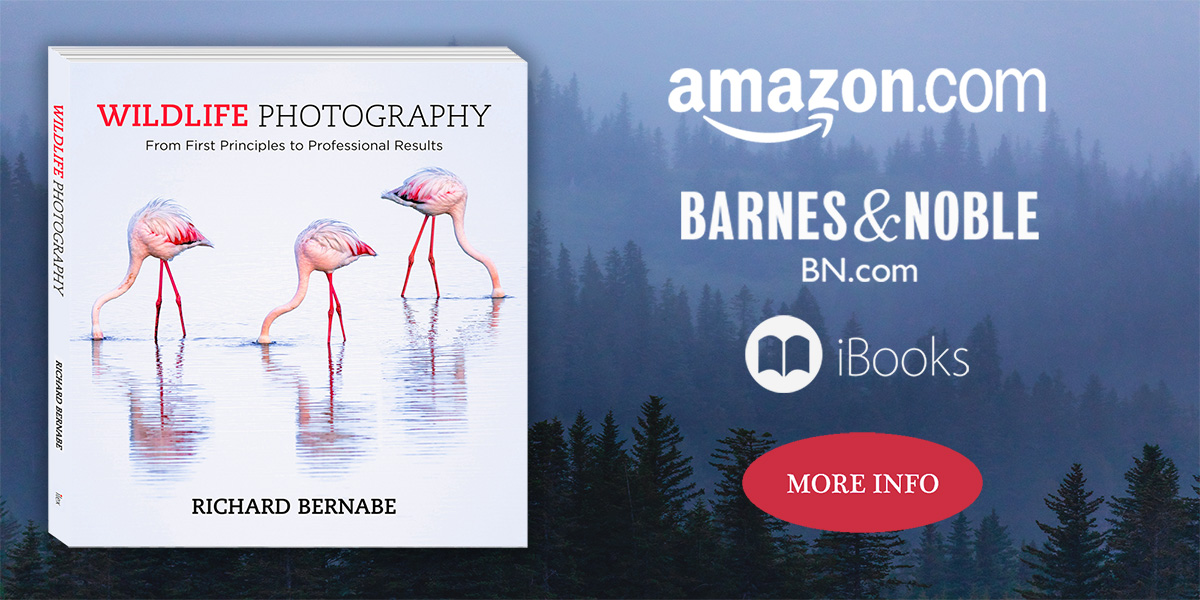