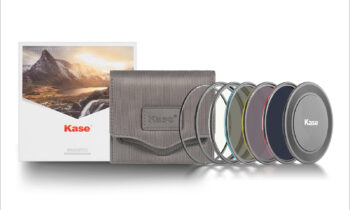 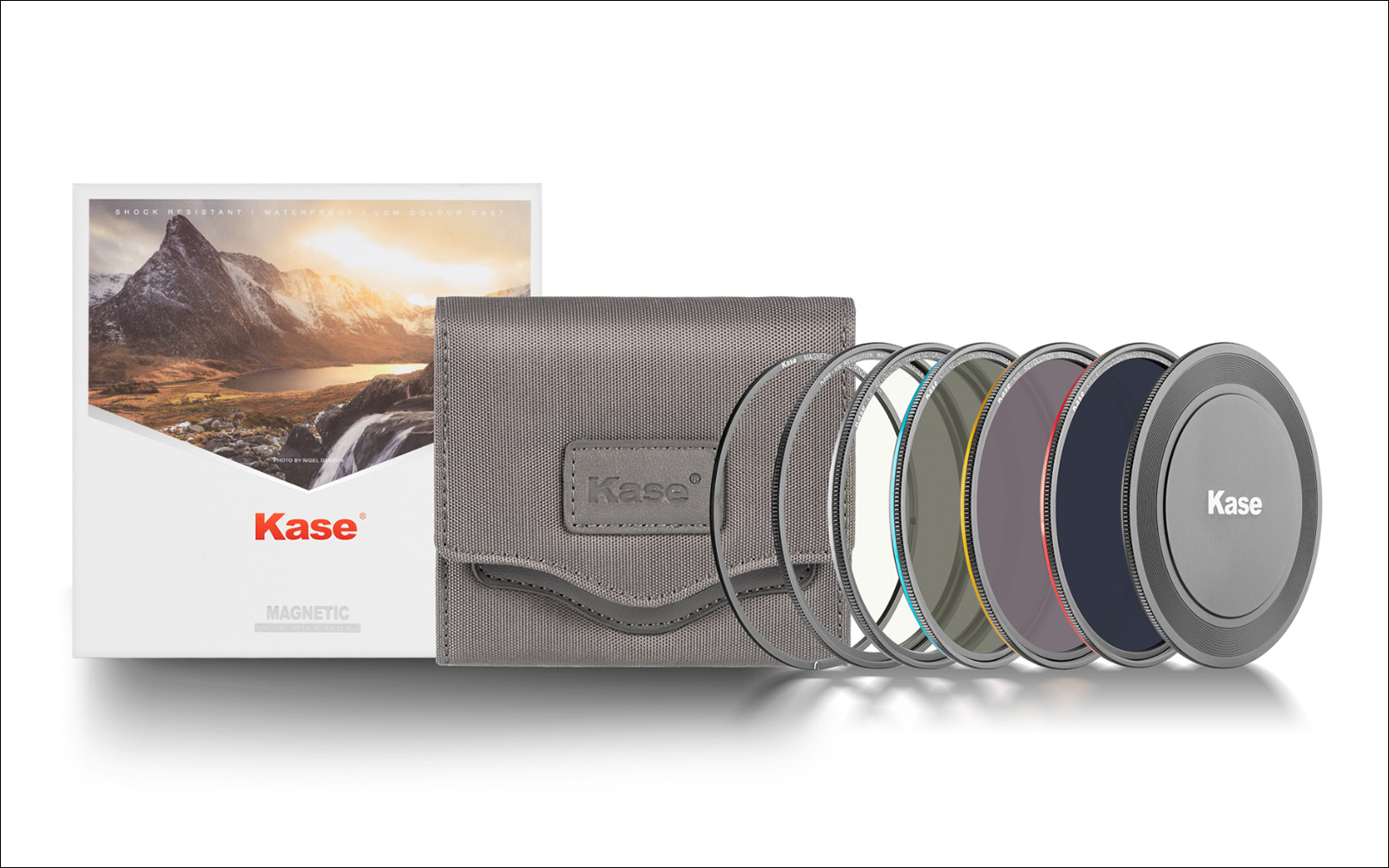 I’ve used Kase Filters for my photography exclusively over the past 3 or 4 years after trying nearly every brand on the market. That’s because the quality of Kase glass is unsurpassed and the filters impart zero color cast to my images, unlike many of their competitors.  Recently, they released the Kase Revolution magnetic filter set with color-coded rings, tempered, shockproof optical glass, and ingenious magnetic adapters.

The Kase Revolution Magnetic Circular Filters Professional Kit is available in 77mm, 82mm, 95mm, and 112mm sizes plus any step-up rings that might be  needed. The full set consists of 4 color-coded filters: 3-stop, 6-stop, and 10-stop neutral density filters (perfect for long exposure photography), a polarizing filter, magnetic adaptor, inlaid adapter ring, magnetic lens cap, and handsome carry pouch. Kase Revolution filters are made from the same tough, color neutral pro glass as the square filters, so all photographers can be assured of the best image quality possible and still have peace of mind.

I still use the Kase square filters and holder for 90 percent of my photography – especially when doing landscapes – but I personally tried the new Kase Revolution system and really enjoyed using them for wildlife photography with my Canon RF 100-500mm lens. The quality of construction and materials that make up these filters is unmatched and their performance was off-the-charts good. If you’re looking for a new filter set – or your first – I would highly recommend these 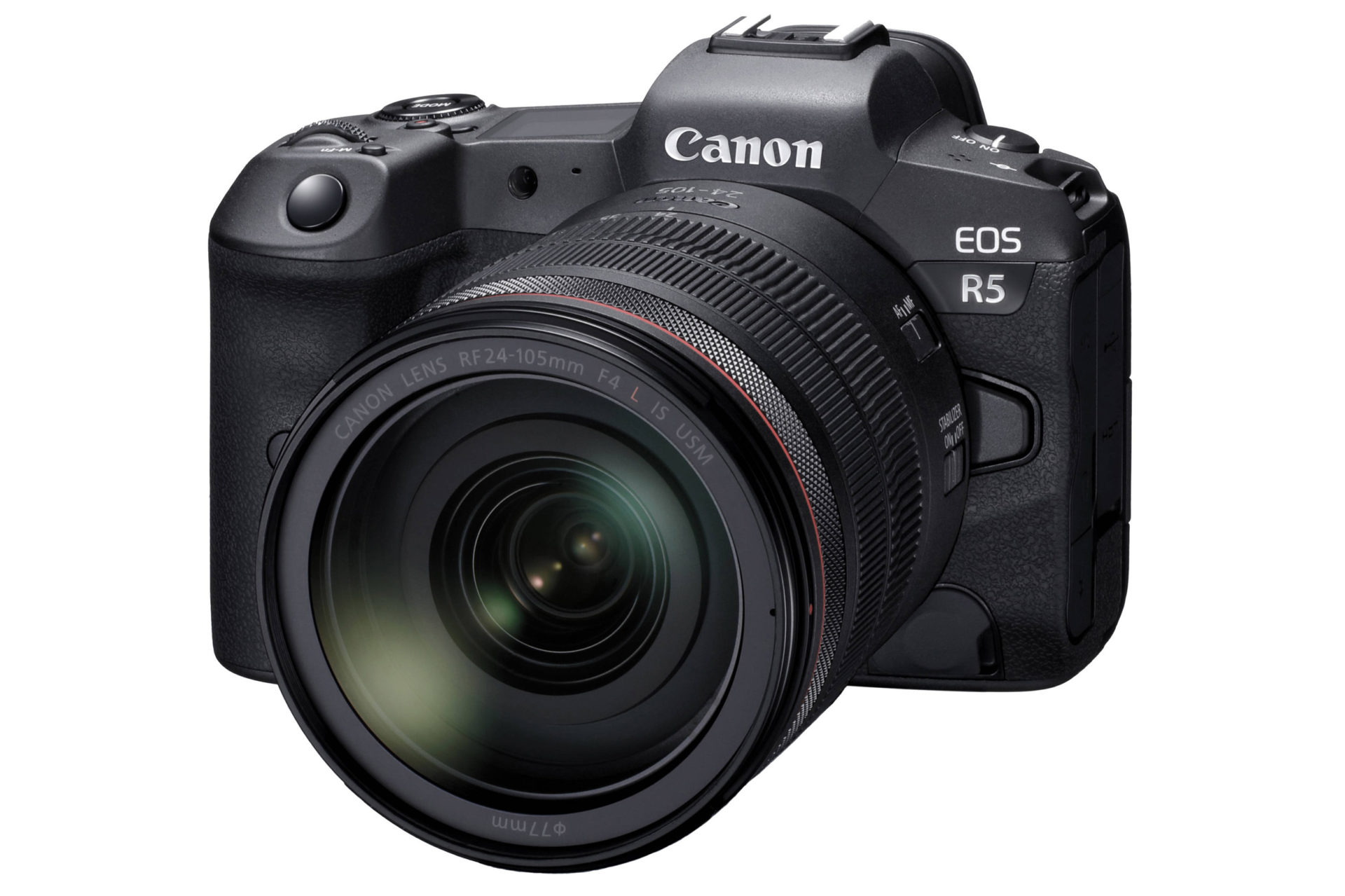 July 10, 2020: I placed my order for two Canon EOS R5 cameras yesterday and I expect delivery early next month. You can expect a full hands-on review in early to mid-August.

Canon made their official announcement today on both the R5 and R6. The first shipments of the R5 will begin on July 30, 2020 with a retail price of $3899.

May 26, 2020: According to a report from Canon Rumors, the price of the Canon EOS R5 will be less than $4000 USD. Great news for those of us who are waiting for the release of this amazing camera.

April 20, 2020:Second EOS R5 development announcement from Canon. It’s been conformed that the sensor size is to be 8192 x 5461 pixels or 44.7 megapixels, validating the 45 MP rumors that had been floating around for some time. The camera will include 5-axis In-Body Image Stabilization, working with existing IS on RF and EF lenses. There are lots of impressive video features that I am not too concerned about but many others might be. Adding some of these to the Specification List below.

There is still no word on the EOS R5 price or a release date but it was originally believed it would be available before the 2020 Summer Olympics. With the Olympics now postponed until 2021, who knows.

March 13, 2020: Canon has confirmed that the EOS R5 will support animal Auto Focus (AF) Animal AF can recognize animals and birds so the camera can not only precisely focus on the animal’s eye but the whole body in situations where the eye is not conspicuous. This is a huge boon for wildlife photographers.

Canon also announced that 8K video can be captured up to 30p in all 8K modes and will use Canon’s Dual Pixel CMOS autofocus.

February 20, 2020: According to several well-placed sources, the new Canon EOS R5 will be available for purchase by late June – early July of 2020 before the Summer Olympics.

February 12, 2020: The Canon EOS R5 full-frame mirrorless camera is currently under development, Canon has officially announced. This is the latest addition to Canon’s highly acclaimed and popular EOS R System.

According to today’s announcement, the new Canon EOS R5 aims to expand the range of image expression by utilizing the features of the “EOS R System” to achieve even higher-speed continuous shooting and 8K video shooting. In addition, communication functions, operability, and reliability can be further improved, and workflow can be streamlined. With these functions, the basic concept of the EOS series, “rapid speed, comfort, and high image quality” is realized at a high level.

This was only an announcement that the Canon EOS R5 was now in production while many details about the new camera were not specified. We’ll all stay tuned for more over the coming months. 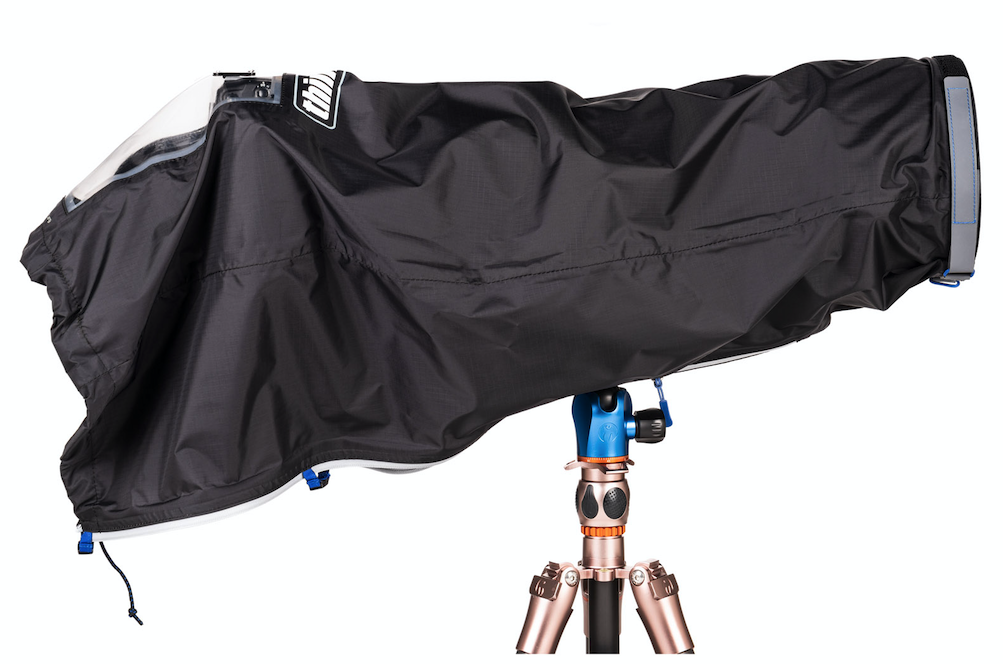 Protect your expensive super telephoto lenses from foul weather with an Emergency Rain Cover in Large. This seam-sealed rain cover protects your camera and lens even in a heavy downpour, dust or snowstorm. A zippered bottom opens up for a tripod or monopod attachment, or for better access to the focus ring. Photographers can cinch up the cover for a tight fit, loosen like a tarp, or roll it up on the lens hood so it’s at the ready in any kind of weather. The Emergency Rain cover fits neatly in your kit and can deploy quickly when outdoor conditions change. 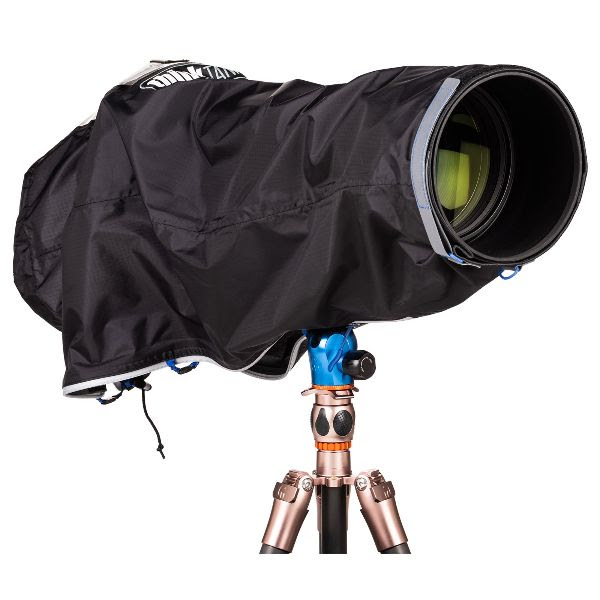 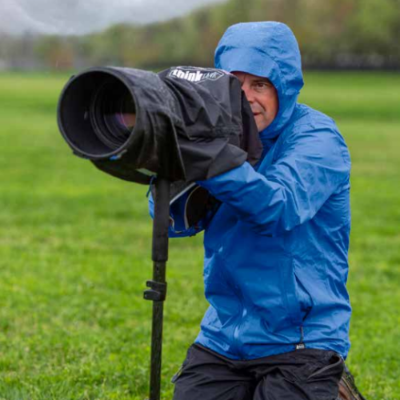 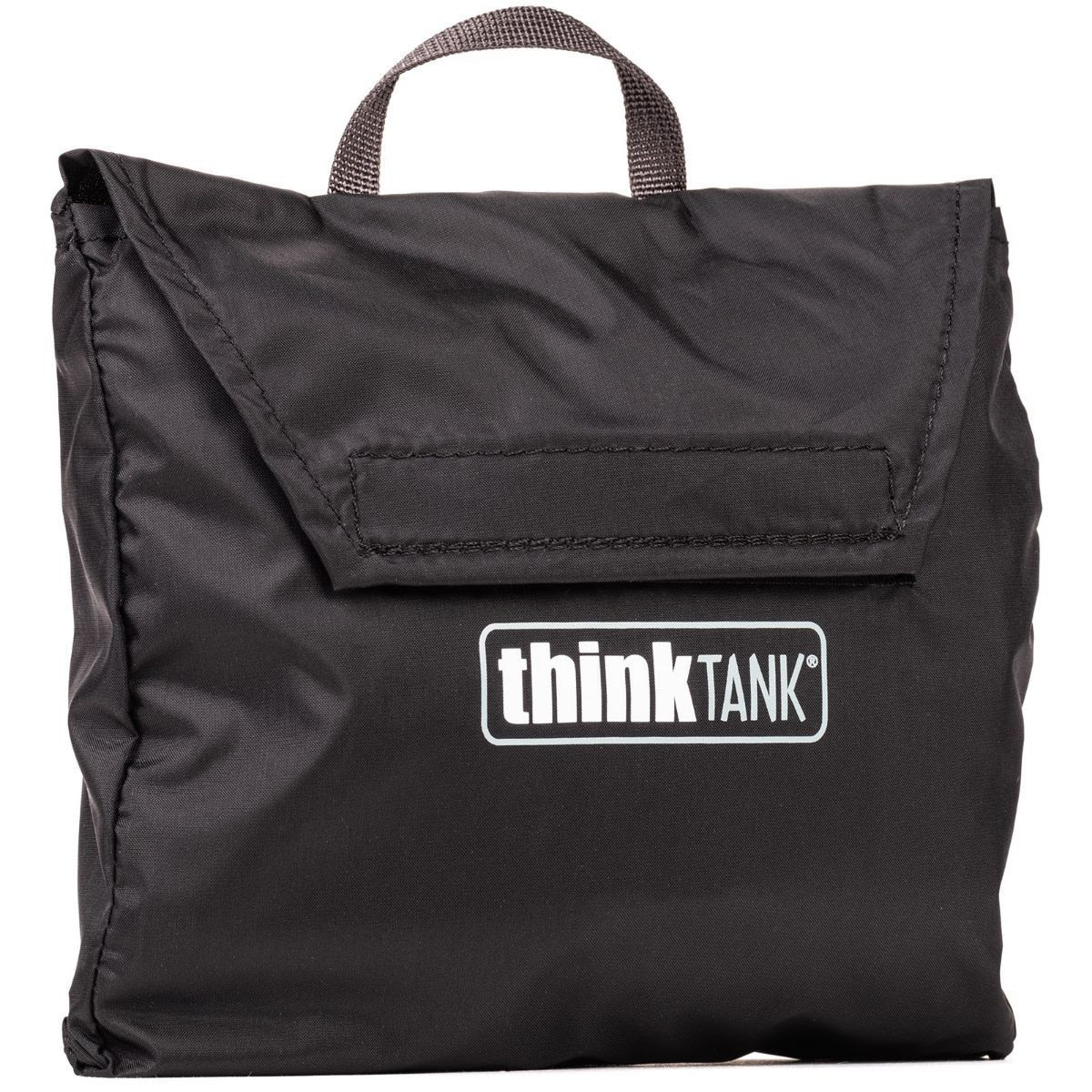 • Seam-sealed for extreme protection in downpour or dusty conditions

• Oversized window to view your LCD and controls

You can also check out the Small and Medium Think Tank Emergency Rain Covers on Amazon. 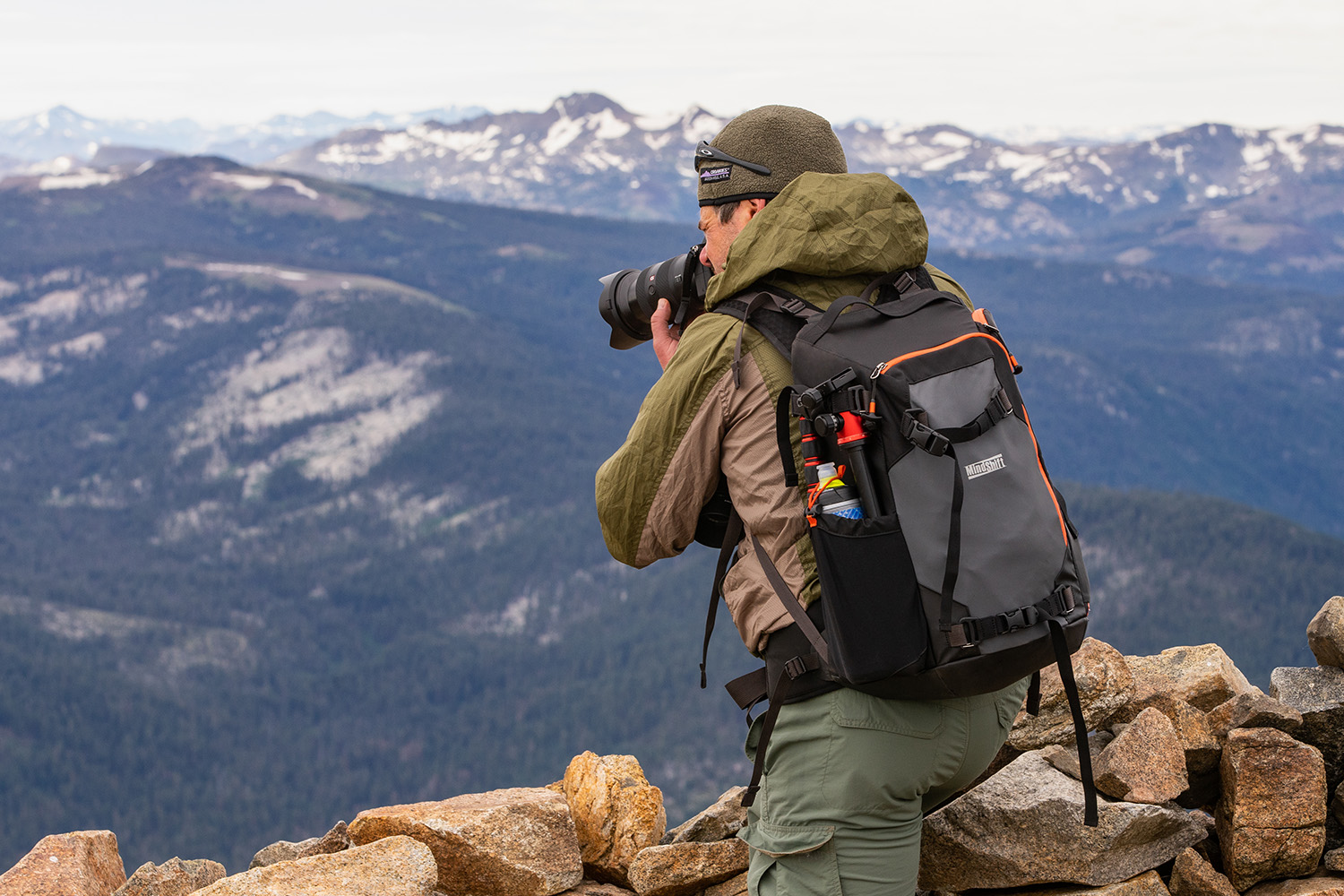 Adventure photographers need a camera bag that’s as tough as they are. With its rugged materials and faceted design, the MindShift PhotoCross 13 backpack from Think Tank Photo will protect your gear from another punishing trip into the wild. The PhotoCross 13 is built to withstand the elements, yet comfortable enough to wear on long days in the field. The extralarge side access point gives you complete access to your gear when you’re ready to take the shot.

Available in two colorways, Orange Ember and Carbon Grey, the PhotoCross 13 features waterproof zippers and is constructed from durable, abrasion-resistant materials, including a heavy-duty tarpaulin bottom panel. Wide, body-conforming shoulder straps give superior support for long days on the trail, and the wide, removable waist belt and breathable 320G air-mesh back panel will keep you comfortable and cool.

Get your MindShift PhotoCross 13 Backpack here 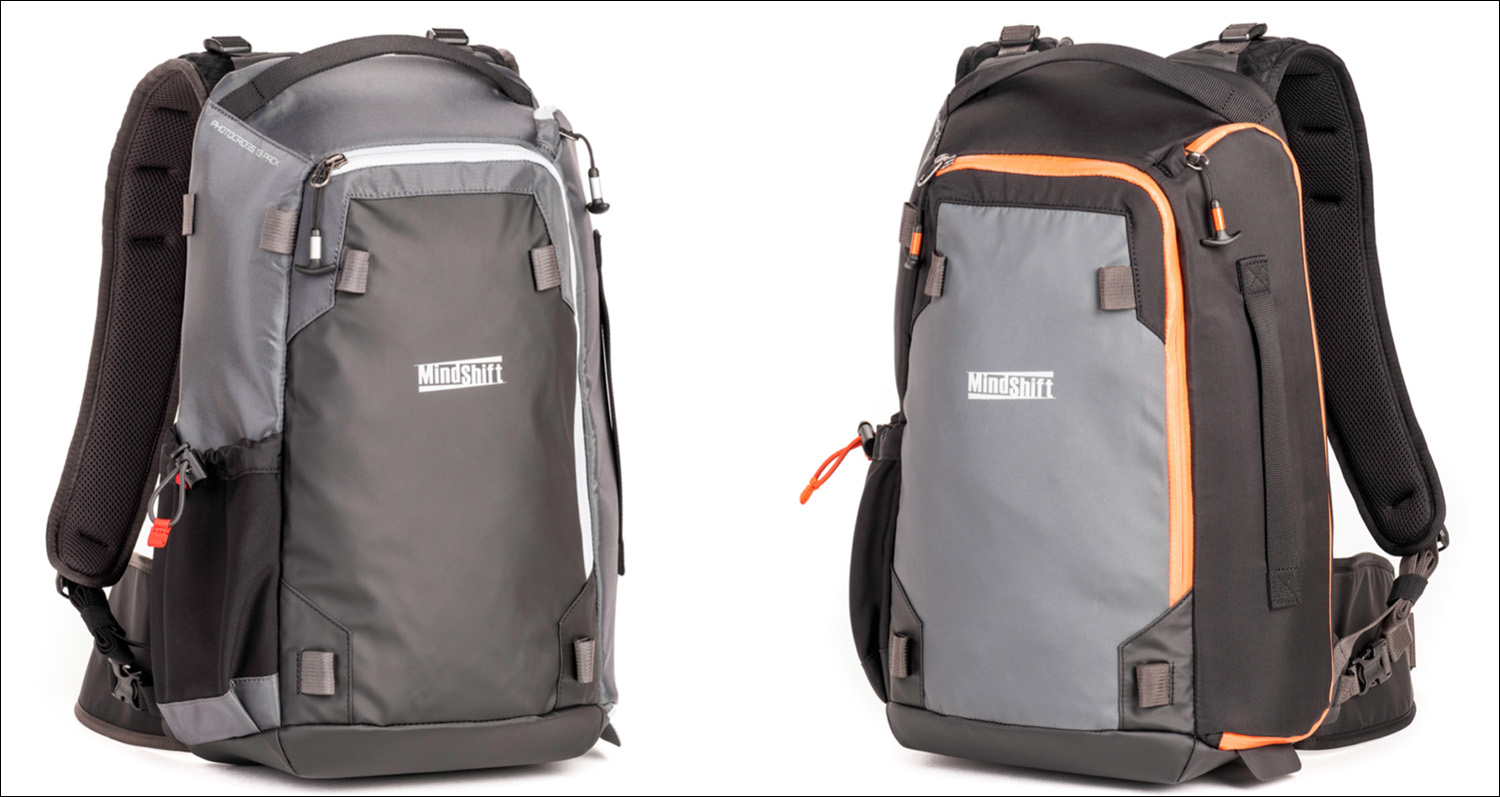 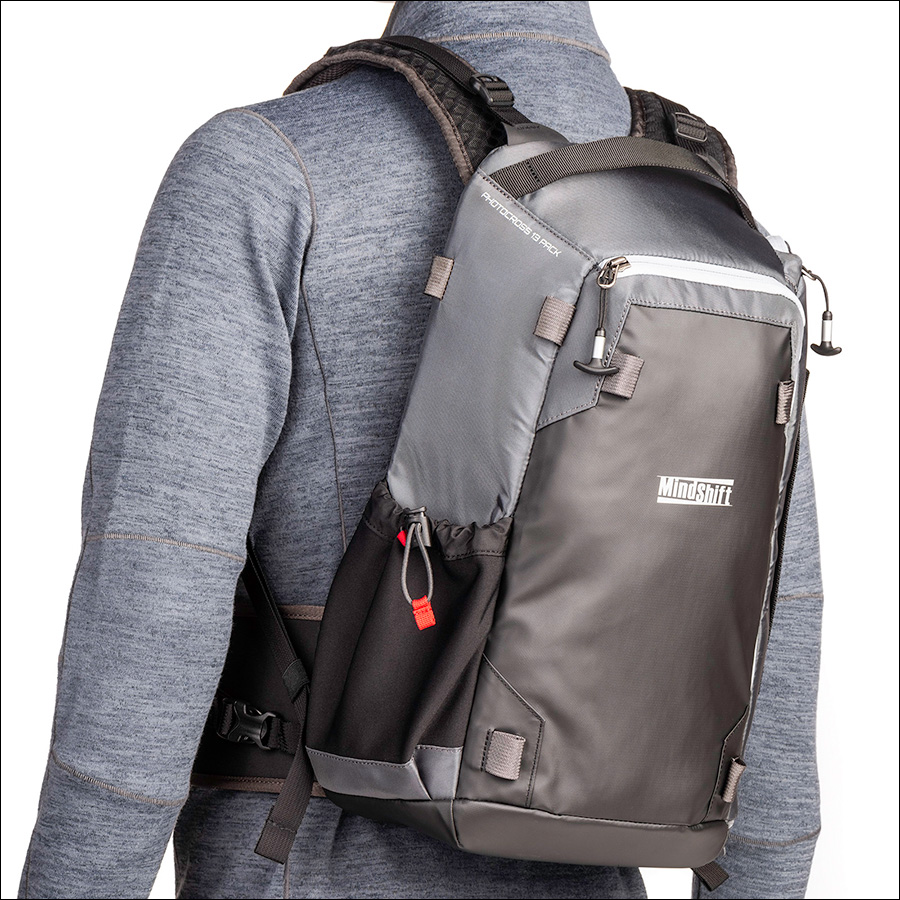 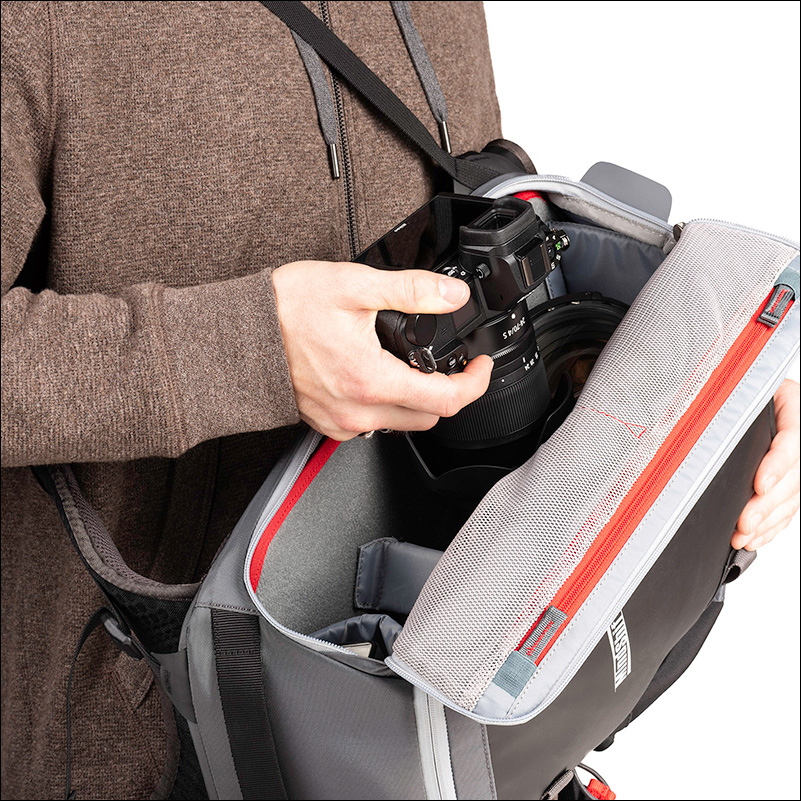 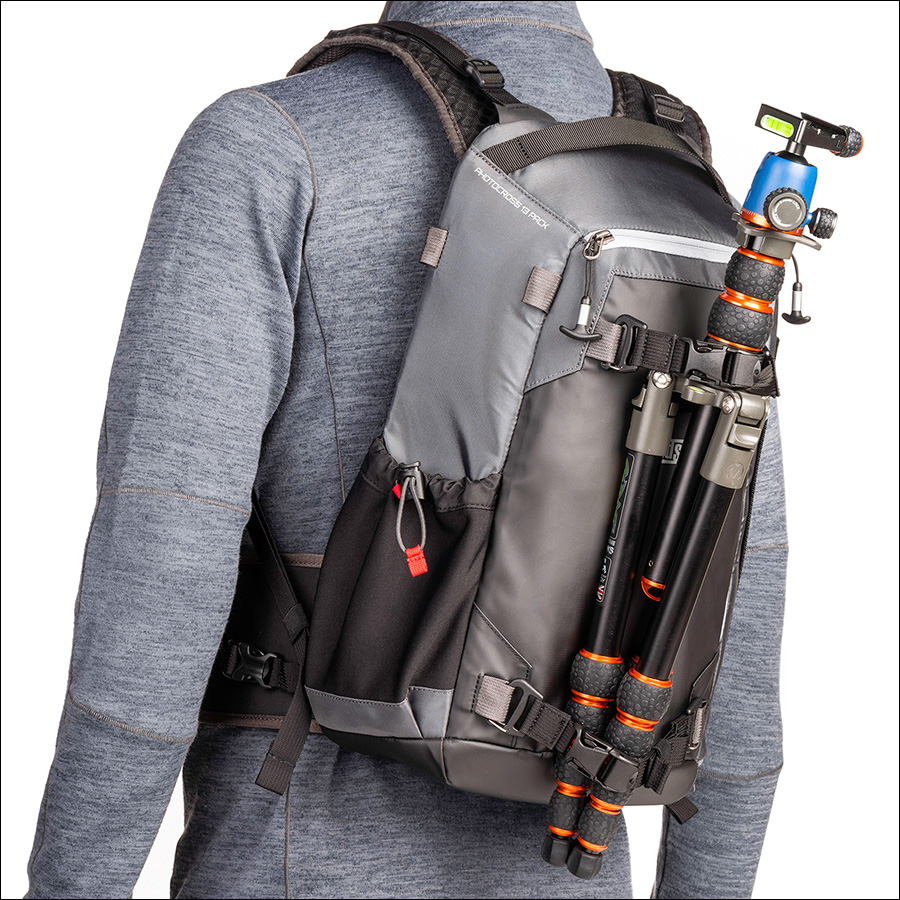 • Front pockets for filters, snacks, or a light layer are easily accessible

• T-pulls are easily gripped with or without gloves

Get your MindShift PhotoCross 13 Backpack here 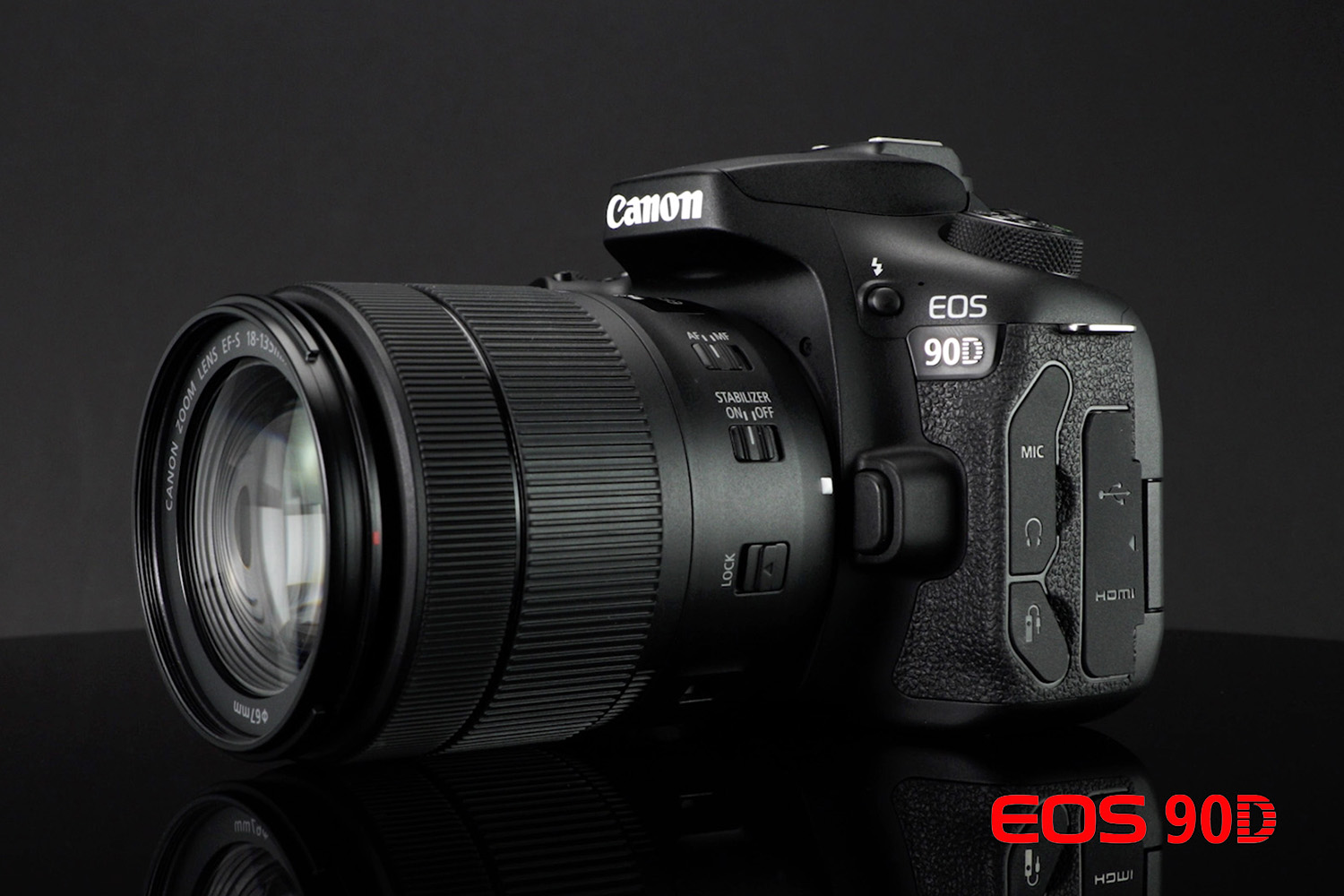 The Canon 90D will officially be released by Amazon on September 12, 2019.

The new Canon 90D was announced today by Canon and it appears to be aimed at the advantaged amateur who prefers wildlife and sports photography. This is a logical replacement to the popular Canon 80D.

From the Canon Press Release:

The EOS 90D DSLR camera is ideal for the advanced-amateur photographer who values the look-and-feel of the DSLR body and benefits such as an optical viewfinder, 3.0-inch vari-angle touch screen LCD, addition of the multi-controller and a shutter button feel of professional EOS cameras. Now capable of shooting up to 10 frames-per-second (fps), a drastic increase from the 7.0 fps with the EOS 80D, users can capture all of the action on the sidelines of a football game or wildlife while on safari. Assisting in a photographers’ ability to capture the action is the 45-point all-cross type AF system, 100 percent viewfinder coverage and now supports up to 27 points in f/8 metering. In addition, the new AE sensor boasts an impressive 220,000 pixels and utilizes EOS iTR AF (face priority) detection. Together, these two features allow for the detection and tracking of faces in various environments and shooting situations while using the viewfinder. 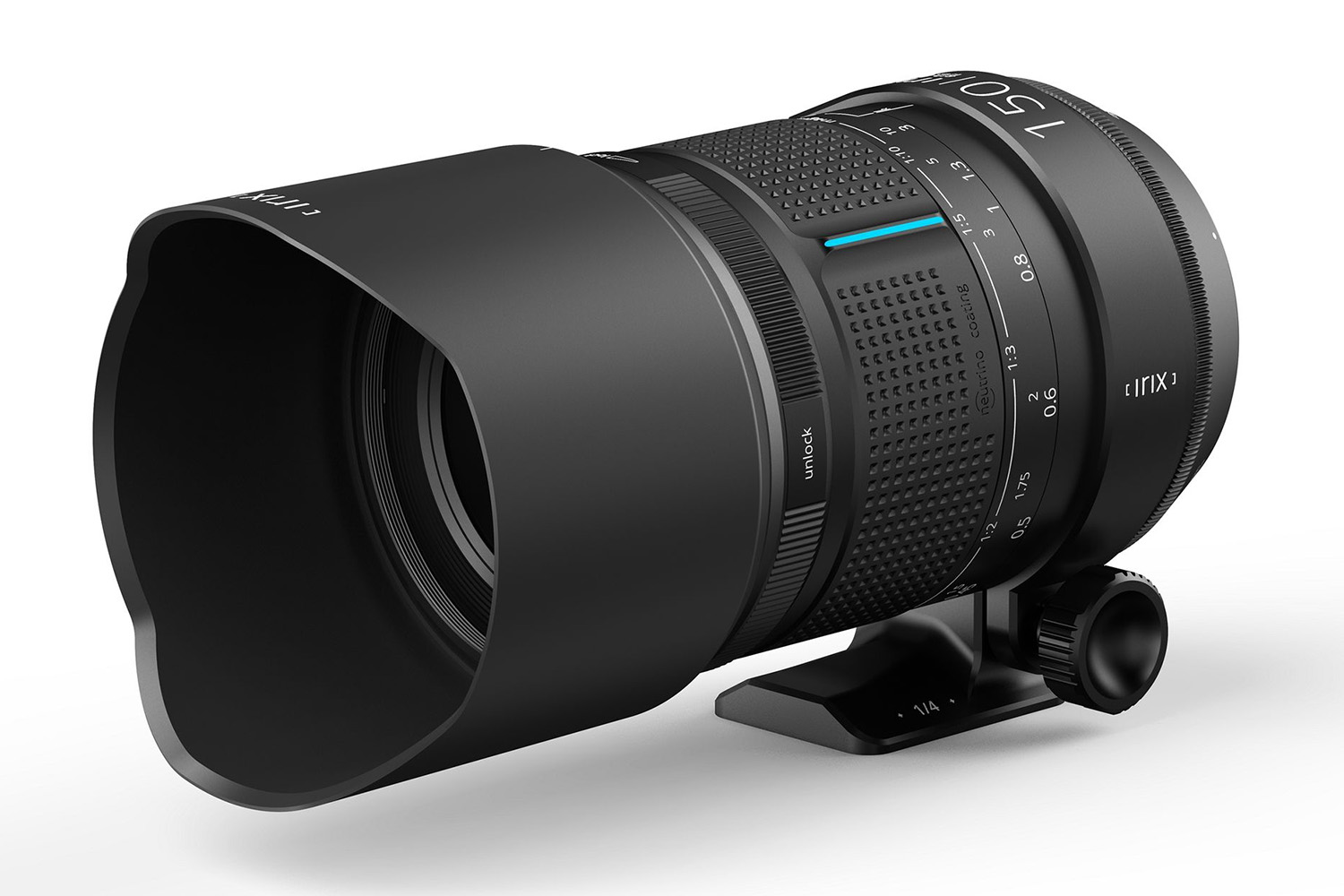 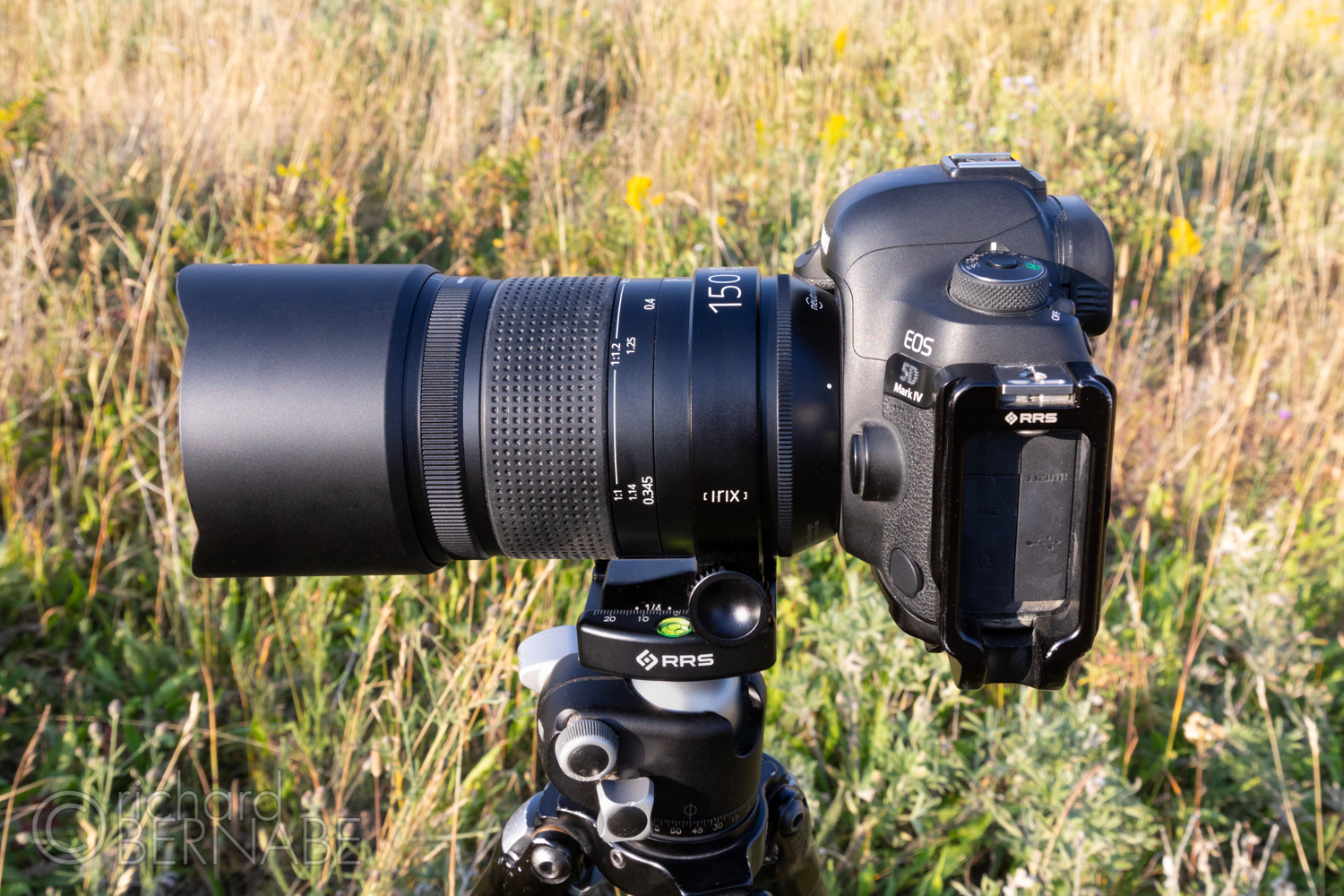 Back in January of this year, the good people at Irix USA sent me a new 150mm f/2.8 Macro 1:1 Dragonfly lens to try out, use, and review. I’ve photographed with it a handful of times over the past few months and I’m just now getting around to offering some opinions. My opinions are POSITIVE! In fact, I couldn’t find one thing I didn’t like about the lens. Honest.

Here’s a summary of what I liked about the newest Irix lens: It’s manual focus, which all macro lenses should be. There is no practical need for autofocus with a macro lens. The highly rubberized focusing ring is smooth and adequately damped for fine-tuning the focus. In fact, everything about the lens says “solid” and “quality” to me. It’s the perfect focal length for a macro lens as well. At 150mm, the angle-of-view is narrow enough to easily control the background, which is really important when doing macro photography. Even though the lens is relatively small and compact, Irix has added a lens collar so transitioning from horizontal to vertical and back is quick and easy. And there’s a Arca Swiss mount built into the lens foot! I hope this catches on and becomes standard practice.

Image quality is superb, which is what I’ve come to expect from Irix. My experience with the Irix wide-angle primes (11mm and 15mm) prepared me for this result. It’s incredibly sharp and contrasty. The bokeh, something pretty important when it comes to macro photography, is smooth and creamy at large apertures, even at 1:1 true macro reproductions. The large f/2.8 maximum aperture on the lens allows a lot of light for focusing, especially in live view.

The Irix 150mm f/2.8 Macro 1:1 Dragonfly lens can be ordered with the Canon EF (pictured here), Nikon F, or Pentax K mounts. Let’s hope it’s updated later for the new mirrorless mounts. The lens barrel is composed of metal alloys with a polished, satin anodized metal finish and it’s packaged with a very stylish molded case that protects the lens well when transporting. Everything about how the lens looks and performs is first class. 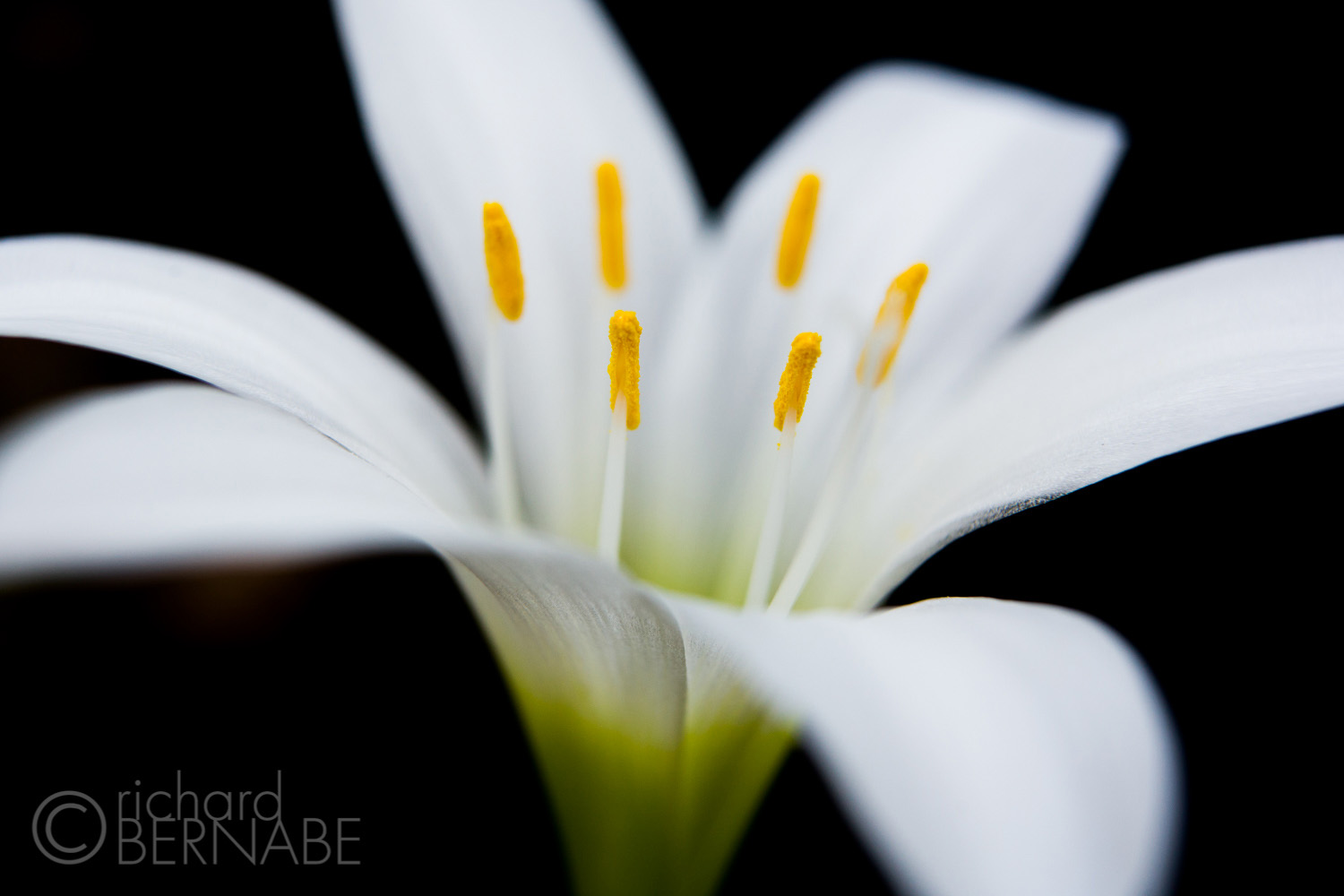 I just received the new Irix 150mm f/2.8 Macro 1:1 Dragonfly Lens from Irix USA. I’ll do an in-depth review once I have the time to actually use this telephoto macro lens, but my first impressions are the following: The lens is solidly built. It feels cool, heavy, and dense in my hand. 150mm is the perfect focal length for a macro lens, in my opinion. The telephoto perspective really allows you to control the background much better than shorter focal lengths. I absolutely love the fact that the lens has a detachable tripod collar (to make it much easier to go from horizontal to vertical and back) with a built-in Arca Swiss mount. Why don’t other lens manufacturers do this as well considering this is the industry standard?