Havana is an eclectic, neurotic city of more than two million people, pulsing with multi layered rhythms, colors, moods, and energy. It’s been called an exhausting nightmare, sublimely tawdry, and the most romantic city in the world while all possibly being true simultaneously. Winston Churchill called Havana “a place where anything can happen” and on that count, it rarely failed to disappoint. This little slice of Caribbean chaos can be just about anything except boring.

As a casual visitor, you might be led to places like Revolution Square and other obsequious homages to Castro, Guevara, and Marti. Finca La Vigía, an estate set high along the city’s perimeter, is where Ernest Hemingway called home from 1939 to 1960. Then of course there’s La Habana Vieja – The Old City – with its colorfully-painted paladares, festive open-air cantinas, and gaggles of sunburnt Canadian tourists wearily shuffling through the cobbled alleys.

I’m not one to complain about tourists while pretending I’m not actually one of them myself, so for two days I dutifully imbibed the scene’s contrived nostalgia with the same combination of enthusiasm and irony that I applied to its famously overrated mojitos. Yet I was gaining a thirst for something more than just the same tired tourist circuit. Authentic and gritty is what I sought, a furtive peek behind the superficial facade. I wanted to experience, if only for a day, “the poorer quarters where the ragged people go,” borrowing a phrase from Simon and Garfunkel’s imperishable The Boxer; the crumbling buildings, the working markets, the suffocating poverty, the real lives of real people. I wished to go native.

On the morning of day three, I flagged down a taxi in front of the hotel, a flaking blue ‘53 Chevy, and set out solo into the heart of the steamy inner city. After forty exhilarating minutes of walking and exploration, I had not the faintest idea where I was or how I had gotten there. I was lost. 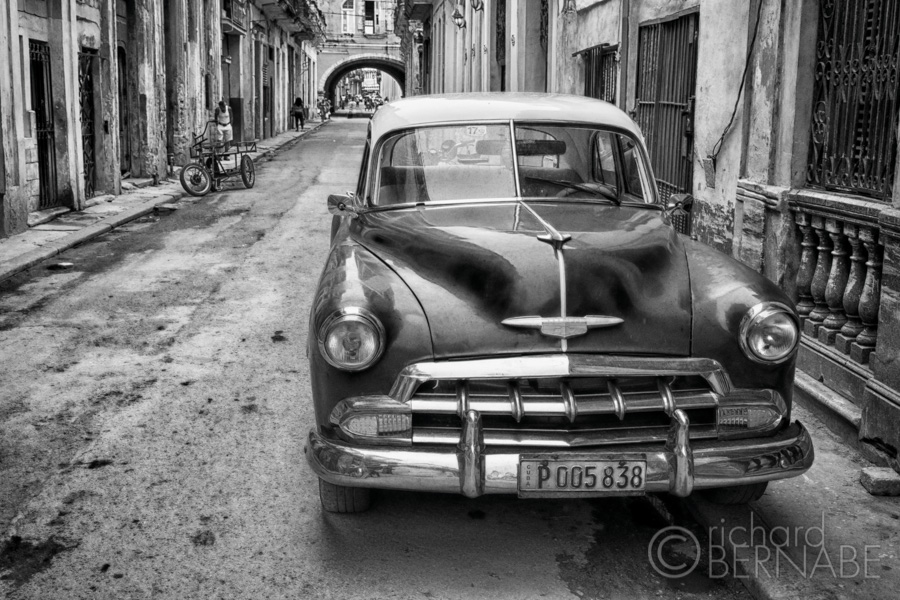 Being lost is often cited as one the four most crippling human fears. And while technological progress has made little headway with death, heights, and public speaking, it has nearly succeeded in reducing the art of getting lost into a lost art. GPS devices, smart phones, and navigation apps with talking virtual assistants can get us from Point A to Point B with ruthless efficiency while offering little about where we are in the world, figuratively speaking.

According to cognitive scientists, getting lost is an essential part of how we grow and develop as humans. Whether it’s in a big, sprawling city like Havana, a forest, or a good book or movie, losing oneself, even for the briefest of moments, is good for the mind and the soul. Aside from the state of being lost, there’s the added benefit of getting unlost at some point, a practice that draws on exercising one’s intuition, reasoning skills, and memory recall. Making mental maps and establishing spatial awareness using landmarks and physical cues – instead of relying solely on technology’s cold, clinical instructions – are important cognitive functions that are quickly becoming lost, for lack of a better word, in today’s digital age.

Having spent much of my childhood in the foothills of rural North Carolina, I was given an extraordinary amount of freedom as a young boy to get lost at will, which I often happily did. A typical journey began on a bicycle, continued on foot through unfamiliar tracts of woods, fields, and dusty dirt roads until I became lost, or at least unsure of my location. I would then instinctively seek out the most familiar feature of the local landscape, the eastern escarpment of the Blue Ridge Mountains at Roaring Gap. I knew this piece of splendid scenery like the back of my hand and it was my navigational and emotional North Star. With this guidepost in sight, I could calibrate my bearings with respect to east, west, north and south and the direction that would take me from the Land of the Lost back home to Possum Trot.

The fear probably has very little to do with the condition of actually being lost, which is pretty harmless itself, but rather the psychologically unsettling disconnection from the familiar and the consequences that can arise from it. In a wilderness situation, it would certainly be irresponsible not to carry a GPS device, if only for an emergency, but just as irresponsible if it became a preoccupation and distraction from what was most important – the experience. In an urban environment, the fear is focused on being harmed in some way by another person; a stranger. But if you’re ever the unfortunate victim of assault or physical violence, the statistics point to overwhelming odds that you will know your attacker personally, probably intimately. Strangers are regularly disparaged in the abstract, but the kindness and generosity offered as individuals have saved me from more than just a few moronic decisions while traveling. By averting our gazes to the flickering screens of our phones and tablets while avoiding interaction with others, we only miss out on much of life’s rich banquet. And do we really want these devices raising an entire generation of young men who grow up never knowing what it’s like to refuse to ask for directions?

And what exactly is lost anyway? Well for starters, it’s both relative and subjective. Everyone and everything are always somewhere since nowhere doesn’t exist as a real place. If you’ve ever lost your car keys or the TV remote, they are only lost to you. If the remote could talk and was asked to comment on your little crisis, it would have to admit that being lost wasn’t all that bad, thankyouverymuch. Being lost can be a place of cosmic bliss and a buzz of creative inspiration for us humans too, if we’d only give it a chance. For others, however, lost is an unhappy place of doubt and uncertainty and might very well be Dante’s forgotten tenth circle of hell. The mild epithet, “Get Lost” is a G-rated simulacrum of the vulgar, three-word directive with the aforementioned four-letter destination. Maybe hell, after all, is an eternity spent wandering the vast, empty corners of the universe, helplessly and hopelessly lost. And maybe some of us actually find comfort in that notion and a glimmer of bliss too. After all, it’s possible that hell can be one person’s bliss just as bliss can exist as another soul’s personal hell. And lost? It’s just a four-letter word. It’s all about how you look at it.